A Historian and a Futurist Walk Into a Bar ... 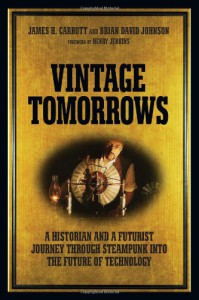 I had a hard time categorizing this book. Not too surprising, since the premise quite literally begins with "A historian and a futurist walk into a bar ..." and goes from there.

Ultimately, I concluded that it was just what I suspected: an ethnography of steampunk. I had the delight of meeting author James H. Carrott during Clockwork Alchemy 2013, and his premise was quite interesting: what can steampunk show us about how the past affects our future?

Carrot (and his co-author, Bryan David Johnson) explore maker culture, technology alterations and yes, even Justin Bieber's music as they look at the impact of the relatively small subculture of steampunk. Carrott sets the steampunks next to the Beatniks and Hippies as a movement poised to affect culture at large ... and goes about proving his hypothesis.

It would be very easy for a book like this to come across more arid than the Sahara. However, Carrott presents his subject matter with humor and humanity (important points in the book), interviewing figures as diverse as Cherie Priest, Margaret Atwood, and Justin Bieber's manager, Scooter, to make his points.

Overall, it's an interesting look at a subculture from both the inside and the outside. If you want to know why steampunk might just be more than slapping gears on something and wearing lots of brown, this is the book for you.