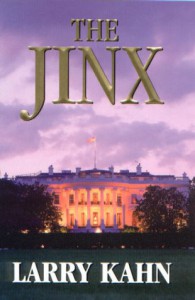 I acquired this book quite some time ago and only recently got around to reading it. "The Jinx" is a political thriller, based on the idea that US presidents elected in a 20-year cycle tend to die in office.

The main character, Ben Kravner, is a trust and estate lawyer with a major firm. When one of the clients, Adams Thompson, is murdered, Kravner winds up handling his estate and, in the documents, finds evidence of a treasonous, racist familial conspiracy related to the so-called 20-year jinx.

The historical detail is interesting, and author Larry Kahn definitely sets up a world that, in his pages, is ripe for a race war. However, the text definitely feels dated as, in 2000, he was writing about how there had never been an African-American president. It was true at the time, but obviously is not anymore.

This is not to say that the points Kahn makes in the subtext are not valid; it's just that it's not the timeless read it could have been.