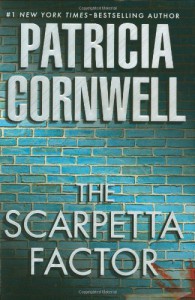 I haven't read a Scarpetta novel for a while, and when I saw this one in our office's Little Library, I decided to grab it.

This time, Kay is helping out in the New York Office of the Chief Medical Examiner pro bono, as well as consulting on CNN (I seem to have missed a book or two, so I don't know why she is no longer in Virginia). Her niece, Lucy, is involved with an assistant district attorney ... and also with tracking down a person who wronged her during the recent financial crisis.

A person who happens to be missing and presumed dead by just about everyone but Lucy.

Then there's Warner Agee, the FBI behavioral analyst who took over Benton Wesley's job when he was in witness protection ... and he wants Kay's job with CNN.

So, yes ... many a subplot. And then a woman shows up dead; a woman with connections to the person Lucy is looking for. This is what gets the ball rolling and connects all of the subplots together.

As always, the book is rich in forensic detail ... but it seems as though the characters were phoned in a little bit compared to other novels. Of course, this series has been going on for 20 years, so perhaps that is inevitable. Hard to say. In any event, it was a pretty good read, but not one of my favorites of the series overall.