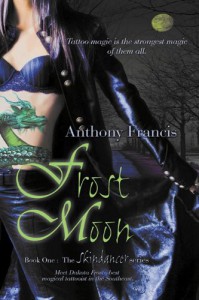 Disclosure: Anthony Francis and I know each other through our work at Clockwork Alchemy, a local convention.

"Frost Moon" is first of the Dakota Frost books, set in an alternate Atlanta. Dakota is a magical tattooist and a skindancer; she can make her tats come to life.

In this book, someone is stalking and killing people with magical tattoos and Dakota is brought in to help with the investigation. Soon, people around her are becoming victims of the killer ... and then she herself is threatened.

Francis creates an alternate Atlanta with an "Edgeworld," where the magical folk (such as werekin and vampires) live (around Little Five Points, for those who know Atlanta). From abandoned warehouses to shuttered nightclubs, the secret Atlanta is its own place of interest.

More than anything else, these tales put me in mind of an edgier Charles de Lint, with a second community boiling just under the surface of the mainstream.

Highly recommended for fans of urban fiction. I can't wait to read the rest.
indie-author-friends