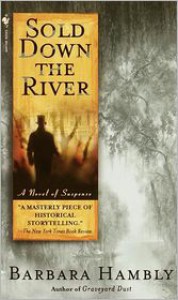 Even though I finished it in a single day (because it was fascinating on many levels), the premise of this book bugged the hell out of me. In this title, free man of color Benjamin January is guilted by his mother into going undercover as a field slave on his former master's plantation in order to find out who is fomenting rebellion among the slaves there.

That Ben doesn't tell Livia to stick it is a puzzle to me, because he has horrific memories of what life was like as a little boy owned by Simon Fourchet ... but he agrees to the plan. Thus, the free surgeon and musician is working as a slave during the roulaison: cane-cutting time. And a lot of stuff is going down, to say the least.

This book gives us a clear look at the life slaves endured: what kind of "master" a person had was entirely up to fate, and Fourchet was of the worst sort. We see beatings, rapes, and yes, murders. Ben starts looking deeper into what's going on at the plantation ... and soon finds himself literally running for his life.

The whodunnit did come as a surprise to me, as did a few other revelations in the tale. I literally stayed up late to finish the book because I wanted to know what happened. But I just couldn't get over my disgust at how Ben was manipulated into the entire situation.