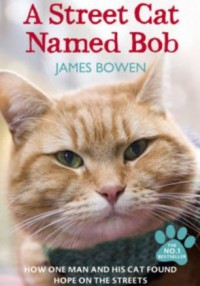 It's hard to say who rescued whom in this book. James Bowen is a recovering heroin addict living in a housing project when Bob shows up at the door. James initially thinks the ginger tomcat belongs to a neighbor, but after asking around he concludes that the cat is a stray and takes him in.

Pretty soon, the two are inseparable ... and Bob starts giving James a reason to not only get out of bed to do his busking but also to finally get clean and sober from heroin.

Bowen talks pretty freely about his life and the challenges he faces, and how important Bob became to him.

The book is absolutely charming, and I can't wait to read the other two Bob stories.