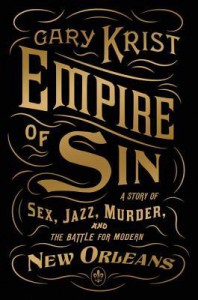 Gary Krist examines Progressive era (1890-1930) New Orleans through the eyes of the underworld in this extensively researched book (more than 30 pages of bibliography and footnotes).

Krist looks at politics, the Mafia, prostitution, and even the rise of jazz music through the particulars of two crimes (a kidnapping and a series of murders) that take place around so-called Storyville, the officially sanctioned red light district just outside the French Quarter.

In the text, we learn about some pretty colorful folks, like Tom Anderson (a state senator who had his finger in a great many shady businesses as well as some legitimate ones), Josie Arlington (a rather famous madam), and others.

The challenge with this text is that it can sometimes be a bit of a slog to get through. I could only read a few pages at a go, regardless of how colorful the real-life characters were. Krist is a little dry in his presentation ... not quite pedantic, but approaching it.

The history is interesting, and the book is worth reading if you're interested in this period in general and New Orleans history in particular. It's just not a page-turner.