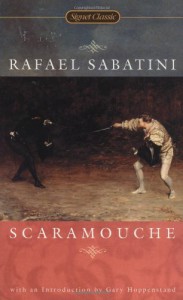 I saw an article recently that said many people lie about reading classics as their most common way to appear smarter to others.

Well, I'm apparently something of a strange duck: I really *do* read classics. This is one of them.

Scaramouche is the story of Andre-Louis Moreau, a provincial French lawyer during the time of the Revolution. Through a variety of circumstances, he leaves his little home town for Paris. During this journey, he becomes an actor (portraying the eponymous commedia del'arte character), the instructor of a fencing academy ... and even a representative of the Cote Gauche in the Third Estate. Moreau is driven by revenge; a member of the nobility has killed his best friend. All of the various roles he portrays lend themselves to his quest to even the score.

It must be said that the language is a little florid, as was popular at the time this book was written. It was, nevertheless, an entertaining tale. Highly recommended for those who like their escapism to contain lots of swashbuckling and derring-do.