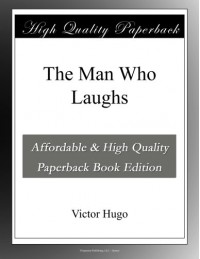 Victor Hugo writes a lot about the plight of the underclass, and the importance of social equality ... and this book is no exception.

Gwynplaine, the titular character, has been permanently disfigured as a child. He is abandoned by those who disfigured him and, as he is trying to find help, he finds an infant whose mother has died. This child, Dea, is blind. It is almost inevitable that the two of them, taken in by a mountebank who calls himself Ursus, will fall in love as they grow up together.

Of course, we find out in the course of the story that Gwynplaine is more than he appears to be. In fact, (view spoiler). He brings up issues of importance to society and is shouted down because his face is so amusing to those who could actually help.

By the end of the story, everyone is fairly miserable. But Hugo gets his point across well. Highly recommend for fans of his work.