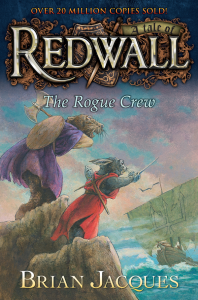 The first Redwall book I read was Salamandastron, way back in the early 1990s. I was immediately charmed by the world created by Brian Jacques, with his little animals bravely defending their territories against encroachers.

Since then, I have read many others, from Redwall Abbey to Rakkety Tam and more. Despite being far removed from the books' target audience (author Brian Jacques developed the stories for the children in the cancer ward at Liverpool Hospital), I was charmed by their world.

"The Rogue Crew" is the last of the Redwall books, because Brian Jacques passed away. So, it was a little bittersweet for me to read the adventures of Uggo and Posy (two little hedgehogs), Skor Axehound (a sea otter) and the rest of the characters in this book as they fend off the vermin of the Greenshroud, captained by Razzid Wearat. Not only do we have the Guosim (Guerrilla Order of Shrews in Mosswood), under the command of their Logalog, Dandy Cloga (so called for his fabulous footwear), but also the peaceable Fortunate Freepaws and more. The tale was entertaining and, as always, everything comes out as it should ... albeit with some losses on both sides of the battle, all of which are dealt with in a sensitive fashion.

There was a lump in my throat when I read the letter from Redwall Abbey's Abbott Thibb to Lady Violet Whitestripe of Salamandastron at the end of the book, welcoming all of the Salamandastron and High North Coast crews to Redwall Abbey any time ... because there will not be any more adventures to read. In my heart, the little Redwall mice, hedgehogs, and all of their friends will always be together.