Sympathetic Look at a Controversial Figure 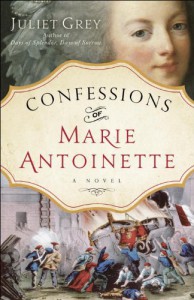 The book is well-researched (in an unusual move for a novelist, author Juliet Grey includes a bibliography), and creates a sympathetic picture of the royals that is probably well-deserved. It is also a well-written book that brings us into the world of the Revolution as seen through the eyes of first-person narrator Marie Antoinette and young female sculptor Louison Chabray (a historical person as well), who is used as a secondary narrator.

Unfortunately for me, not having read the previous two books, I think that I've missed out a good deal of Louison's character development. She, like the rest of the sans-culottes in the tale, seemed two-dimensional and flat. I get the author's intent of creating sympathy for the royals, but the idea that anyone is pure evil feels unrealistic to me. The Jacobins, Girondins, etc., truly believed that they had the country's best interests at heart ... just like the royal family.