Sample Saturday, "In The Eye of The Storm" 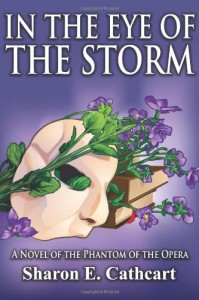 Shortly after we arrived in San Francisco, Maman received a package from Zareh that made her weep; it was Papa’s opera, “Don Juan Triumphant.” Zareh had gone back to the opera house, he explained, knowing that some of Papa’s belongings were still there. He took the score with him then, and wanted Maman to have it “for Erik’s girl.” There, in Papa’s own untidy hand, was the most astonishing composition I had ever seen. This was nothing like the Czerny, Dvorak or Haydn works I had played at many a recital; it was a work of absolute genius. I ran for my violin, and played a few measures; the melody made my blood race.

“Please, Maman. You have to talk to Madame Ellis. I must play this piece at the next recital evening,” I begged.

Maman eventually relented, and I pored over the score until I found just the piece I wanted to play. Madame Ellis found it confusing when I showed it to her; she had never seen its like either. Despite what she called the “unknown composer” (I had explained that it was my papa, but she dismissed that as “a child’s fancy,” for in her mind no modern composer could have created the work), she gave her blessing to present the new composition.

I played the piece constantly in preparation for the next performance. Maman and Beau-Père sat proudly in the recital room when I performed, but I could not help noticing the expressions on the faces of the other parents as well as my fellow students. They were not very well prepared for Papa’s unusual piece, and the applause was polite despite what I knew to be a perfect performance. Only Maman, Beau-Père, Mrs. Kaye and Michael were truly enthusiastic.

After we returned home, I went upstairs and got ready for bed. I was upset and frustrated; I had hoped that people would recognize my papa’s brilliance. Maman sat on the edge of the bed and talked with me for a long time. The opera had only been performed once, under duress on the part of the theatre’s managers, and the sophisticated Parisian audience had not really known what to make of it either. It was clear that Maman expected no more from a group of American parents who were there primarily to hear their own child’s performance, no matter how mediocre.

“It’s unfair, though,” I protested.

“Of course it is, ma petite. Unfortunately, you will find that many things in life are unfair.”
She hugged me tightly, which took me by surprise. For as long as I could remember, Maman had been just a little distant with me, especially by comparison to Papa, our Rom family, and even Beau-Père.

“Your father would have been very proud of you tonight,” she whispered. “Beau-Père and I certainly are.”

I could have asked for no higher praise.