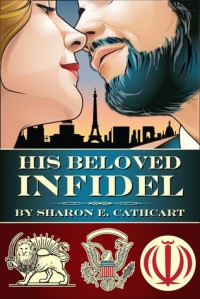 Farukh pulled the papers out of his mail slot and went to his classroom. On top of the array of mimeographs was a small envelope addressed to him in an unfamiliar, but decidedly feminine, hand.

He slit the envelope carefully with a letter opener and read Catherine’s note of appreciation. Without stopping to think, he walked out of his classroom and down the hall to hers.
Catherine looked up as he entered.

“Monsieur Aria,” she smiled. “Thank you again for your generosity.” She stood up and stepped away from her desk. She wore a blue knit dress that emphasized the color of her eyes, and a pair of fashionable black leather boots.

“I ...” he paused and took a deep breath. “There is a city in my country called Isfahan. This perfume is named after it.”

He wanted to slap himself. Had anyone ever sounded so foolish?

She stepped a little closer. “I know. I looked it up.”

Catherine had never realized how intense Farukh’s brown eyes were until that moment; they were so dark that she could barely tell where the iris left off and the pupil began.

“I didn’t get gifts for anyone outside my department,” she continued sheepishly.

“I didn’t give the gift with any expectations,” he replied. He could smell the sultry perfume; it was intoxicating.

“Well, perhaps I could take you out for supper on Saturday?” Her impulsive thought came out of her mouth almost as soon as it occurred to her.

Catherine’s boldness surprised Farukh. “I would be honored,” he said.

He stepped out into the hallway and hurried back to his classroom before he could say anything foolish. Unbeknownst to him, Catherine watched him for a while ... which was how she saw him do several Persian dance steps. This was a side of her quiet colleague that she would never have predicted; he moved with the grace of a tiger.

"His Beloved Infidel" on Smashwords

"His Beloved Infidel" on Amazon US