Slow to start, but well worth reading! 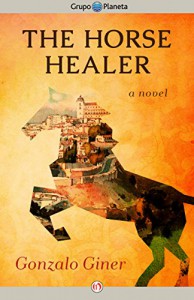 "The Horse Healer" is the story of Diego, a 13th Century Spanish boy, who has a gift for working with horses. His father is killed and his sisters kidnapped during the so-called Moorish occupation, and he escapes on his beloved Arabian mare, Sabba, determined to find them and defend their honor. In the mean while, though, he trains to be an albeitar -- a sort of horse veterinarian -- with a local Muslim doctor. He discovers not only an affinity for healing horses, but for language ... which allows him to study important texts in other languages.

Throughout the 17 years covered in this novel, we see Diego growing and learning, and also see what is happening with his sisters. We see him fall in love a couple of times, as well as his struggles.

Author Gonzalo Giner is a veterinarian, and he has clearly studied his profession's history. The book is packed with historical detail and is quite well-researched.

While the book was a little slow to get started, in fairly short order it picked up pace and became a real page-turner for me. There are some graphic scenes of violence (it's about war time, after all), but nothing gratuitous.