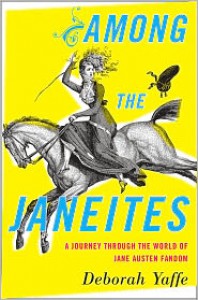 I initially assumed that "Among the Janeites" would be something of an ethnography:  an examination of the demographics of Jane Austen fandom, with some entertaining stories thrown in.

Author Deborah Yaffe's description is much more accurate; it's a journalistic investigation.  Yaffe interviews a cross-section of big-name fans, from former Cisco Systems president Sandy Lerner (who bought Jane Austen's former home, Chawton House) to Phyllis Ferguson Bottomer, a speech therapist who posits the not-at-all unbelievable idea that Austen's beloved Mr. Darcy just might have Asperger's Syndrome, to Baronda Bradley, famous for her Regency attire at various conventions.  There are, of course, a good many more people and parts of Austen fandom examined, including the films (notably the 1995 version with Colin Firth as Mr. Darcy) that caused an Austen explosion in popular culture.  All interviewees are members of the Jane Austen Society of North America (JASNA), which is where Yaffe found the grist for her work.

While there is always great potential for a book like this to be more arid than the Sahara, or to focus only on the most peculiar aspects of a fandom, Yaffe avoids both of these pitfalls tidily.  Each of the interviewees, regardless of their perceived eccentricity, is treated sensitively and their positions examined through a gentle lens.

I thoroughly enjoyed the book, even though I am what one of the JASNA members decried as "those people who've only read 'Emma' and 'Pride & Prejudice.'  )Two down, four to go!)  I would recommend this book to any Austen fan, or anyone interested in tales set during the Regency.