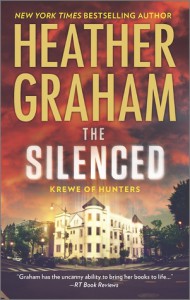 This is the second Krewe of Hunters book that I have read. I really enjoyed the first one, and looked forward to this one when I saw the opportunity to review it.

Lara Mayhew is a congressional aide who leaves a meeting and is abducted. Her best friend, Meg Murray is an FBI agent. The girls' connection is more than just friendship; they have always been able to contact one another via ESP. Meg also sometimes sees ghosts. It is this latter ability that sees her recruited into the Krewe, a paranormal investigation unit.

The book is told in the third person, but from the perspective of two sets of observers. The majority of the action is an omnipotent perspective, but part of it is from the viewpoint of "Slash McNeil," the criminal of the tale. Women who look similar to Lara Mayhew are being abducted and murdered, and we know early on that it's this Slash individual doing it ... and that Slash is an alternate personality. What we don't know is who Slash really is.

I started to figure out where Slash came from fairly early on in terms of character groups, and once my primary suspect was eliminated from the possibilities, it wasn't too hard to figure out the whodunnit. In fairness, I must say I do read a great many mysteries and police procedurals, so it happens fairly often.

The romance between Meg and her fellow Krewe member, Matt, didn't feel natural to me; I didn't think the chemistry between them was great. However, that was the romantic element to the romantic suspense here ... and was inevitable from the first moment they met and didn't like each other much.