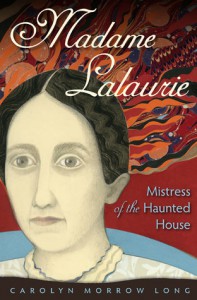 Despite its lurid title and cover, this book is a scholarly biography of Delphine Macarty Lalaurie. The author employed a great many primary sources (the notes and bibliography are extensive) in order to document one of the most notorious cases of slave abuse in New Orleans.

Delphine Lalaurie came from a well-to-do Creole family and lived in a time when slavery was common. Most people of her station had slaves, and despite Louisiana's Code Noir, there was a lot of leeway for how slaves were treated. For example, the Code allowed for a white person accused of abusing slaves to come to court and swear that they had not done so; they were immediately acquitted of the charge.

Delphine Lalaurie's house caught fire in April 1834, and screams could be heard coming from the slave quarters where the fire began. When people went in to rescue those who were screaming, they found seven slaves in such a state of starvation and injury that even other slave owners were shocked. Madame Lalaurie quickly left town and a mob tore down her house after more and more of them saw the slaves who had been so ill-treated.

Stories grew up around the ruined house and Madame Lalaurie's disappearance (she moved to Paris and died there), including stories of the house being haunted.

This book was an outstanding look at life in 1830s New Orleans, as well as an excellent review of both the facts and legends surrounding this notorious woman.