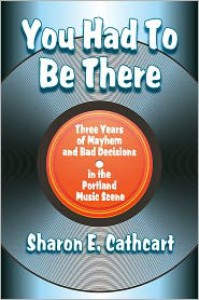 Enjoy this excerpt from "You Had to Be There: Three Years of Mayhem and Bad Decisions in the Portland Music Scene."

To me, music must have three elements:  rhythm, melody and harmony.  I played piano, violin and guitar, and also sang (choir and theatre).  I had a grounding in classical music as a result, and a correspondingly particular ear.  As I’ve said before, my taste is eclectic; I’ll give just about anything a listen in order to formulate an opinion.  Hardcore, thrash, et al., were not my cup of tea.

I loved David Bowie, Roxy Music, Human League; in other words, the “art school” performers.  It was one of the things that made me such a fan of Theatre of Sheep.  I liked the more cerebral sound.

At the same time, I liked a good dance band like Billy Rancher’s, the mod and rockabilly resurgence coming out of Europe, some pure pop mainstream acts like The Police; it was hard to put my taste into one simple box.

One of the bands I heard at the Met was a trio called The Van Goghs.  They had an edgy, mod sound and I liked them a lot.  I approached their manager about doing an interview that I would pitch as a freelancer to "Two Louies," the local music paper.  He and the band were amenable, so I wrote it up and gave it to them for a fact check.

What came from that interview was my first gig as a publicist.  (You knew I’d get to the business part eventually, right?)