A book I might not have picked up, had I not heard the author speak 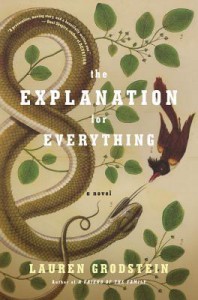 A book about an evolutionary biologist who is challenged by a student who wants to do a thesis on intelligent design is not a book I would ordinarily choose to read.

However, I recently heard author Lauren Grodstein speak about, and read from, this novel during a recent event and found her concept to be more intriguing than it would seem on the surface.  There was so much potential for this book to take a preachy turn ... and it did no such thing.

When student Melissa comes to widowed Professor Andy Waite to propose her thesis project, it's essentially because she's been dared to do so by fellow evangelistic Christian Lionel Shell.  Andy reluctantly decides to accept her project, as she maintains that she can use scientific method to demonstrate intelligent design.  He also agrees to read the books she is using as her texts, so that he can adequately evaluate her project.

Part of the challenge to Andy's atheist beliefs has nothing to do with the project, and everything to do with his late wife haunting the house where he and his two daughters live.  A subplot involving the man who killed Louisa, and how it relates to Andy's research project at the fictional Exton Reed College also twists through the tale.

Everyone in this book finds their core beliefs challenged at some point or another (with the possible exception of Andy's research mice).  It was an entertaining piece of literary fiction, and I would have truly missed out had I not picked up this book.