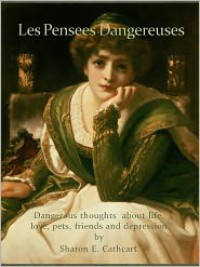 Sample Saturday, "Les Pensees Dangereuses" edition. This was my first collection of essays. It's available at https://www.smashwords.com/books/view/4319, as well as Amazon, B&N, Kobo, etc.

I should be studying, or hauling my car over to Jiffy Lube for an oil change. (I decided to do the latter tomorrow, when I can get to the shop first thing in the morning).
Instead, I'm reading Amber Frey's "Witness For the Prosecution," and I can just mentally hear the other readers of the book yelling at its pages: "Why couldn't you tell he was nuts?"

Well, let me tell you: I know something about being involved with a high-functioning sociopath. He's still referred to amongst my circle of friends and family as Psycho Kevin.

These guys don't wear signs. They are inevitably charming, make far-reaching promises that sound awfully good (but not quite too good to be true). They insinuate themselves into your life and charm the crap out of everyone they can.
Then the changes start to come: the little clues that all is not quite as you might have thought. In my case, clue number one was "Hey, I'm going to take a nap. You can use my computer, but don't log on as me."

Now, it would never have occurred to me to log on as him. Ever. Until he told me not to. It took me less than 10 seconds to figure out his password after he'd gone to sleep -- his son's name. Not too clever.

That was how I discovered the web of lies. I got an instant message ping immediately from someone who said "Hi, Sweetie! I thought you were away on business this weekend. Didn't expect to see you on-line."

That was just the beginning.

I left him, and then the threats began. I would get a zillion hang-ups on my phone. I changed the phone number, and he started trying to get it from friends. One of those friends still has the tape of Psycho Kevin insisting that he had talked to me, that I was suicidal ... and that now the phone was disconnected and could they please, please, please give him the new number so he could talk to me again.

He threatened my physical safety and I got a restraining order against him. That was when I started getting e-mails from his friends: e-mails that revealed the lies he had told them. I got to the point where I was afraid to turn on my computer, because I knew I'd see something there that stressed me to the point of bulimia.

He knew where I worked; I had the biggest, burliest security guard escorting me back and forth to my car each day and (of his own volition) checking it for explosive devices, cut brake lines, etc.

Just last year, long after the restraining order expired, I saw Psycho Kevin at the same fairgrounds where I was doing a horse show (he was attending another event at the same location). I don't think he saw me, but just the sight of him was enough to provoke the same explosive vomiting/nausea I knew so well from the stress of dealing with him in the past. I pointed him out to Jeff, and to the show holder so that he couldn't come into our area without being questioned and escorted out.

Like I said, these guys could be just ... anyone.

That's why Amber Frey couldn't tell Scott Peterson was nuts. He didn't have a sign.