First impressions can be wrong 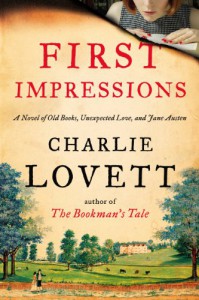 Sophie Collingwood has just graduated from Oxford when her much-beloved uncle passes away. Uncle Bertram gave Sophie her appreciation for antiquarian books, and has promised his collection to her.

When that doesn't go quite as planned, Sophie befriends (and goes to work for) one of her uncle's favorite booksellers. Soon, two very different customers are looking for the same rare book. One of them is the handsome Winston Godfrey; the other the somewhat disturbing George Smedley.

In the mean while, Sophie has met an American man, Eric Hall, who is wooing her with mixed results.

This book is not only about Sophie's first impressions of people but, as the subtitle promises, Jane Austen. Sophie is a huge Austen fan, and the mystery and intrigue of this book involve her favorite author on numerous levels. The book is written in alternating chapters between Sophie's modern day world and the world of Jane Austen.

This book was highly entertaining and I recommended unreservedly to the "Janeites," as Austen's fans call themselves.